Donation of Monetary Gift to Parents of Quadruplet 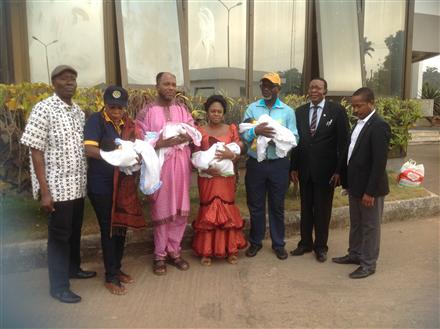 The Rotary Club again donated the sum of ₦50,000 to the parent of a set of quadruplets.

On the 19th January, 2015, the Rotary Club of Benin again donated the sum of =N=50,000 to parent of a set of quadruplets. This came timely to the parents as they were seeking for financial assistance to help cater for the babies. The event was attended by the President, Rtn Percy Okojie, the vice president Rtn Aghedo Moses, the secretary, Rtn Hussein Oshiobugie, the treasurer, Rtn Isioma Nwabueze and some other Rotarians. High point was the donation of the cheque of =N=50,000 the parent of the quadruplets. The event was publicized by Independent Television and Radio.