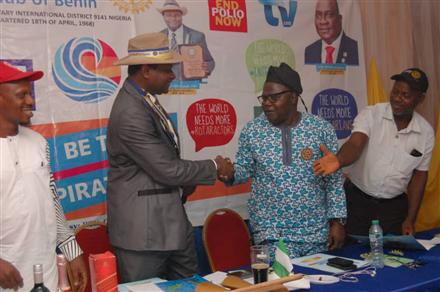 Rotary Club of Benin holds its mid year club assembly with a standing ovation on its achievements.

The rotary club of Benin held its mid year achievments on the 7th of January 2019 with great pomp and pageantry. A standing ovation was accorded the President Nosa Edo-Osagie after the final presentation of his score card on behalf of the great club. Most of the clubs achievements were of first time record. Meeting innovations were introduced notable amongst which is the playing of the national anthem from a USB flash and of course fellowship hall reorganization. Great projects that touch the down trodden people were massively carried out amidst media publicity. .intact the club became very visible not only to the district but to the outside world. A sum of 80,320 thousand three hundred and twenty naira was realised as SAA.