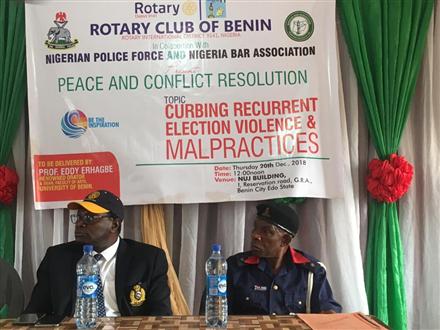 Rotary club of Benin in collaboration with the nigeria police force and the nigeria bar association n held a one day sensitization campaign against election violence and malpractices in the country and profferedd solutions to putting an end to the ugly recurrent trend in the country. A well known erudite scholar from the university of Benin.. Professor Eddy Erhagbe gave a thought provoking and incisive lecture before a huge gathering of politicians from the various parties, the civil society group, student union,the professionals and the general public that included market women and traders. Problems giving rise to violence and malpractices within the society were identified and a panacea was recommended. There were questions and answers section of the lecture and at the end of the day the general public were more informed on the need to eschew violence and malpractices before, during and after elections.