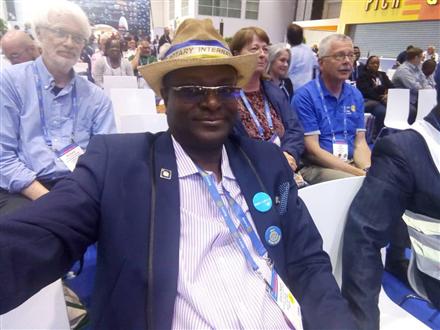 Rotary club of Benin installed its 47th president Rtn Nosa Edo-Osagie at the 50th anniversary year 2018 of the club amidst pomp and pageantry…Almost all the district leaders were in attendance notable amongst them was the District Governor Adeyemi Oladokun, the District Governor Elect DGE Nze Anizor, the District Governor Nominee DGN Virginia Major.There were past district governors PDGs present..PDG Eddy ikponmwen,Charles Onianwa and of course the immediate past district governor IPDG Ikponmwosa Ogiemudia. The Rotary world literally stood still.. My humble self Nosa Edo-Osagie the newly installed president was decorated as a major donor in addition to a new Paul Harris fellow decoration. There were plenty to eat and drink as the bar was inexhaustible. Musical band and cultural troupe in addition to a disc jokey were o hand to spice up and indeed spiced up the ocassion . it was adjudged the biggest and most colourful president installation ceremony in the district.